They Really Want to Take Down the USA

In the below post, Ron Johnson opines that 'Russia is a threat to the US.'

Ron's missing the real threat (some of which are powerful members of his own Party who sit near him in the Senate.)

Wauck found a few blabberings from Davos and then quoted Surber for effect.

… the United States is in deep trouble.

Destroying America is the goal. ... Along with a rampant rise in violent crime, Democrats are scorching the Earth to punish Americans for daring to elect Donald John Trump as president.

Democrats desperately are speeding up their fundamental transformation of America ... The use of mail-in voting to accommodate illegal ballot harvesting installed Biden in the White House. Democrats know they have very little time to make the changes they desire. ...

Inflation was easy to achieve. …

But that is not all. Democrats shut down oil exploration ...

The party also opened the border to millions of illegal aliens, who bring with them drugs, crime and welfare recipients.

Democrats shut down the nation's largest baby formula plant for no reason at all ...

Economic sanctions on Russia are leading to a shortage of fertilizer which will send farm prices soaring.

...Democrats shut down the nation two years ago in the name of public health just to get rid of Trump. Now they are shutting us down again to get rid of capitalism and freedom.

... And yes, Democrats are willing to starve the nation into submission. A score of food processing plants have shut down due to fires and the like, and if you notice this the press will label you a conspiracy theorist.

A couple of posts down from here I mentioned Union Pacific's demand that Pilot cut its diesel and DEF shipments by 25-30% which will have the effect of taking ten percent (TEN PERCENT) of America's trucks off the road.

A few days ago, Union Pacific also demanded that the nation's largest farm-fertilizer manufacturer cut its shipments by 25% as well.

It's a challenge to maintain "comity" and "civility" while identifiable Democrats are attempting to starve you, your family, and your grandchildren, isn't it?

It's even worse when identifiable Republicans are passively (or actively) assisting them in their quest.

During a World Economic Forum panel on the energy crisis, German vice-chancellor Robert Habeck said countries should resist temptation to look after their own interests first. He added sustainability requires change to the "rule of the markets."

Speaking about small and medium businesses in Davos, Norwegian finance CEO Kjerstin Braathen says energy transition will create energy shortages and inflationary pressures, but this "pain" is "worth it."

Joe Biden: "When it comes to the gas prices, we're going through an INCREDIBLE transition"

Alibaba Group president J. Michael Evans boasts at the World Economic Forum about the development of an "individual carbon footprint tracker" to monitor what you buy, what you eat, and where/how you travel.

On the World Economic Forum's panel on a "Reimagined Global Tax System," Oxfam executive director Gabriela Bucher calls for a global 25 per cent corporate tax rate and complains that countries are lowering taxes to be competitive.

A CNN anchor, the chairman of Credit Suisse, and France's top central banker giddily discuss the arrival of central bank digital currencies within five years at the World Economic Forum in Davos.

Yes, there are US Congressmen at this conference, drinking it all in, happily.

Still have your "Civilized" and "Comity" hat on? 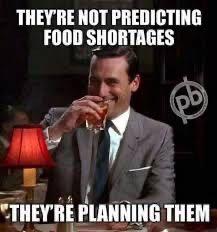