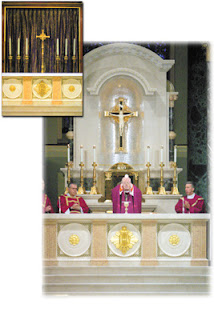 Above are the "Before" and "After" pictures of the Cathedral in Philadelphia. Here's a bit of the story:

In his first pastoral letter as Archbishop of Philadelphia, Cardinal Justin Rigali asked pastors to consider placing the tabernacle in the center of the church behind the main altar if it was not already there and if individual circumstances made such a move feasible.

On Sunday, March 4 at the Cathedral of S.S. Peter and Paul, the Cardinal led the way and made the mother church of the Archdiocese an example to all when he blessed a brand new tabernacle which has been relocated from a side altar to the center of the Cathedral’s sanctuary where it is visible by all.

The tabernacle has been placed on a ledge which is part of a luminous new reredos, a freestanding “screen” erected a few feet behind the main altar. Amazingly, it looks for all the world as if it has been there ever since the altar itself was installed 50 years ago.

“Cardinal Rigali has been telling everyone they should keep Christ in the center of their lives, and what better way to do that than to keep Him in the center of our churches also,” said Louis DiCocco, president of The St. Jude Shop, which was responsible for the new tabernacle, reredos and matching candlesticks.

Another project for Abp. Dolan.