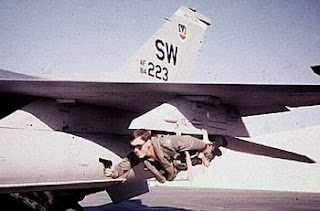 Another perspective on Dave Obey's "yea" from Planet Moron:

Getting Democrats to support the bill required uniting the liberal wing of the party which believes we have already lost, with the moderate wing which believes it would be better to lose next year.

So really it was mostly just a scheduling conflict.

Republicans railed against either option taking the far more philosophical approach that failure is not so much a destination, as a journey…

Dave's famous for two things: defying the Bishop of LaCrosse on abortion voting, and for screaming at a war protester, immortalized on UTube.

Now he'll be famous for managing to combine Pork with Defeat. Helluva tombstone, Dave.
Posted by Dad29 at 10:39 AM