The Mouths of Babes

Malkin caught a marvelous item. The top cartoon was a RESPONSE, drawn by a 12-year-old girl, after she saw the Editorial cartoon in the local MSM rag (Atlanta Journal-Constitution) 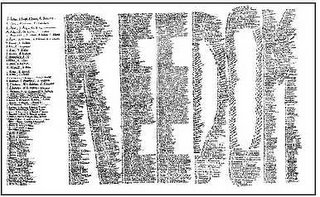 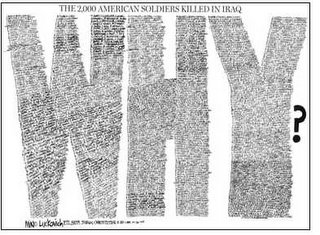 Here's the girl's letter to the AJ-C:

The first time I saw Mike Luckovich’s drawing of the word “WHY?”, made up of the names of 2,000 troops killed in Iraq, was when my mother was putting it up on our refrigerator. It bothered me that no one did a response showing how others feel. On Nov. 8, I got an updated list of the names of the war dead and started writing them, spelling out “FREEDOM.” Six days later, it was done. I only worked on it in my free time at school. It took me about 12 hours to get it done, so needless to say I devoted many of my classes to this, and stayed late after school to work on it. I didn’t take it home and show it to my mother until I had prints made. She and I have different views of things. She said that, as a mother, she didn’t like it that so many people have been killed. She was not happy when I placed my work next to Luckovich’s “WHY?” on the fridge, but it hasn't been taken down. I may seem as if I am too young to have an opinion on matters like these. I am not saying that my opinion is right, for an opinion is just that — someone’s views on something. But, like a child’s voice, an opinion is often not heard.

We often give children a lot LESS credit than they deserve.

That is simply AMAZING. Nothing less. Knowing that children of that age are out there with common sense gives me comfort knowing that when I am 65, the country will not be overrun with bozos.