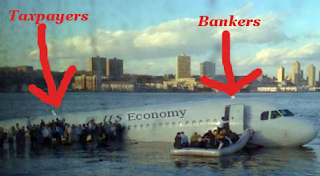 It is reported that the former Chairman of Lehman Brothers has transferred title of his $13.5MM Jupiter Island shack to his wife's name.

It is reported that John Thain of Merrill, Lynch, authorized $4Bn in bonus payments (of which he took HIS part, too) before the taxpayer-financed bailout of MLPF&S by Bank of America.

Those are the reports which have surfaced...

Beer, Bicycles and the VRWC said...

Of course. The rules are different for the super-rich. Always have been.