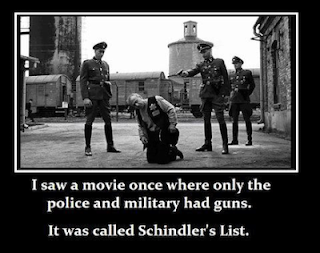 I saw that movie, too.

There is a sequel called the Killing Fields which was pretty good as well.

The Polish underground was also armed (though not as heavily as the Germans or Soviets obviously) but they never appeared in that particular film.

Who is trying to take all of your guns away? Be specific.

Fuck you, that's who.

Anony One: irrelevant question (not surprising).

Since the word "infringe" has two syllables, you have difficulty understanding it.

Look it up sometime. Or buy a clue.

I don't recall the Constitution saying that citizens have the absolute right to obtain specific firearms or shells, just that they have the freedom to own weapons.

As far as Dad29 being able to own a gun, that right has not and will not be taken away.

Yeah firearms. Like muskets. Not semi auto hand cannons with 30 round magazines.

Annon 7:32, your ignorance is showing. An AR is no Hand Cannon. It's a semi automatic rifle. It fires 1 round per pull of the trigger. It's roughly a 22 on steroids. You want a true hand cannon? Look up the 454 Casull, the S&W 500 magnum, or the Israeli Arms Desert Eagle 50. Those, are hand cannons. If you want the Military definition of assault rifle, look it up and learn. Stop using talking points, unless you're an enemy of the Constitution as well.

Billiam: the idiot doesn't know from "Heightened Scrutiny" which is applied in cases restricting ammo. But his ignorance is broad and deep....

Could the clueless anony please show us where the word musket is in the 2A?

There is a difference.

Exactly, you have the right to own a gun, but not the freedom to own any type of gun.

A1053: full-autos are restricted, indeed.