Below is a picture of US vehicle-mileage (year-over-year, 12 month rolling average): 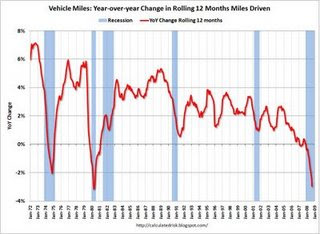 ...vehicle miles driven are off 3.0% YoY, and the decline in miles driven is worse than during the early '70s oil crisis - and about the same as the 1979-1980 decline. As the DOT noted, miles in September 2008 were 4.4% less than September 2007, so the YoY change in the rolling average will probably get worse
Frankie (the Fixer) Busalacchi over at Wisconsin's DOT has a problem. That fuel tax ain't shoveling money into DOT's pockets like it used to...
HT: Calculated Risk
Posted by Dad29 at 7:13 AM

A small part of the solution - Stop wasting precious resources on roundabouts when a 4-way stop is just as effective.

That new traffic circle on Hwy 74 west of Lannon is a deathtrap. It takes the right of way away from westbound through-traffic and gives it to eastbound traffic turning north.

Sorry Mark, I'll get back on topic.

That's what I'm taking about.

Been there. It's a bit uncomfortable...