Venezuela: What the MSM Doesn't Tell You 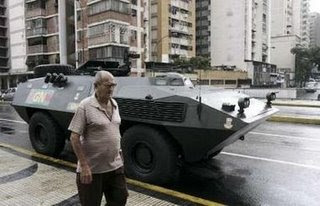 Here's the AP wire report from JSOnline this morning.
Venezuelan police fired tear gas and plastic bullets Monday into a crowd of thousands protesting a decision by President Hugo Chavez that forced a television station critical of his leftist government off the air.

There's a picture of a protester throwing a rock at Venezuelan troops; the protester is one of thousands who are unhappy that the Marxist dictator of Venezuela has shut down the country's only independent TV station--in favor of a State-run enterprise.

For the first time today, Hugo Chavez has sent in tanks to the city centers to line up against the opposition protesting his Marxist takeover of the media
While the picture above was described as a "tank" by the bloggers, it looks more like an armored vehicle (no long-gun is visible in the pic.)

But text from this site indicates that there were tanks:

Venezuelan army tanks and security forces deployed across the capital and other cities ahead of the protests, which are expected to continue Sunday

Likely there will be no AP reports of tanks after the "Equal Time" laws are passed, either.

On the other hand, that's what "Equal Time" is all about. Chavez and other Lefty dictators get the time. You get whatever's equal--as determined by the Left.

Dad - I know where we can send those troops that the Dems want to redeploy from Iraq.

Some animals are more equal than others..