The 7-Star Flag: Her Version of The Gadsden 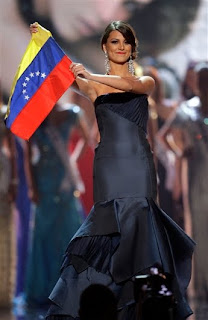 The eye-candy is the FLAG, you scalawags!

The silent protest at Monday night’s Miss Universe Pageant in Las Vegas was invisible to nearly everyone — except Venezuelans. On her final catwalk, the ranking Miss Universe, Stefania Fernandez, suddenly whipped out a Venezuelan flag in a patriotic but protocol-breaking gesture.

...Her flag had seven stars, significant because Chavez had arbitrarily added an eighth, making any use of a difficult-to-find seven-star banner an act of defiance. Fernandez’s countrymen went wild with joy on bulletin boards and Facebook...

While the IBD story compares Ms. Fernandez' flag display to US citizens waving our flag after 9/11, it's even more apt to compare her act to waving the Gadsden here.

That is truly awesome.

Sadly, I fear that retribution will occur.