Bailout: Already There Are Secrets!! 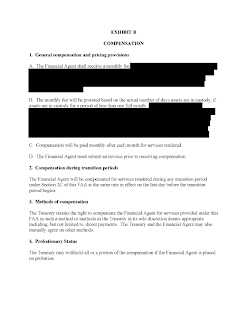 When the Treasury Department's bailout czar provided an update this week on the government's $700 billion plan to rescue troubled financial institutions, he vowed that it would be an "open and transparent program with appropriate oversight.''

This "bailout" has hit the stench level. Carefully crafted or serendipity of the moment, I'm not sure, but the language in this bill gives Paulson vast lattitude in areas that would seem to have no relation to the problem. Also, the unintended consequences wiil be significant and could be worse than what they tried to fix. read this about how they've tanked the normal debt process: http://www.ft.com/cms/s/0/8a0b2edc-a391-11dd-942c-000077b07658.html?nclick_check=1

Your government has gang raped you and left you with an STD and all you can do is bicker over which party is at fault. The masses are truly asses!

Just to be clear - I mean you collectively, not you Dad29.