Bloodlust in the Assembly 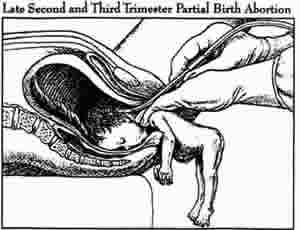 There are, perhaps, only 50 people in the State of Wisconsin who are so barbaric, bloodthirsty, and uncivilized that they endorse partial-birth abortion--which is, esssentially, dismembering a baby as it is born, piece by piece, to prevent "live" birth.

The list is blood-red for a reason. One hopes that NONE of these vampires is EVER invited to ANY Catholic church, school, or college to speak, except if wearing sackcloth and ashes, and they are loudly repenting.

By the way, isn't "Doctor" Wasserman running for a Senate seat whose population is (generally) civilized?
Posted by Dad29 at 9:17 AM

Too bad none of their mothers had a partial birth abortion.