More Secret Than the NSA: the SPP 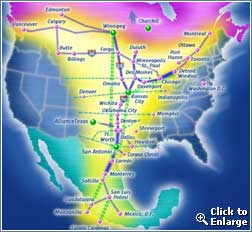 Ol' George, fresh from a good week of Iraqi news, now has some pesky folks asking about the "SPP" Office working in the White House.

The groups, however, have no authorization from Congress and have not disclosed the results of their work

Here's the most lame-brained non-response I've seen in a while:

Geri Word, who heads the SPP office, told WND the work had not been disclosed because, "We did not want to get the contact people of the working groups distracted by calls from the public."

Sure as Hell don't want that bunch of yahoo knuckledragger PUBLIC actually calling CIVIL SERVANTS to ask WTF they're doing!!!!

Actually, Human Events mentions one little project that we know of: the upgrade of I-35 and a parallel rail-line to expedite north-south traffic through the US from Mexico to Canada, complete with a Kansas City Mexican customs-house:

As incredible as this plan may seem to some readers, the first Trans-Texas Corridor segment of the NAFTA Super Highway is ready to begin construction next year. Various U.S. government agencies, dozens of state agencies, and scores of private NGOs (non-governmental organizations) have been working behind the scenes to create the NAFTA Super Highway, despite the lack of comment on the plan by President Bush. The American public is largely asleep to this key piece of the coming “North American Union” that government planners in the new trilateral region of United States, Canada and Mexico are about to drive into reality.

And you thought that the White House didn't have any more secrets...
Posted by Dad29 at 6:17 AM