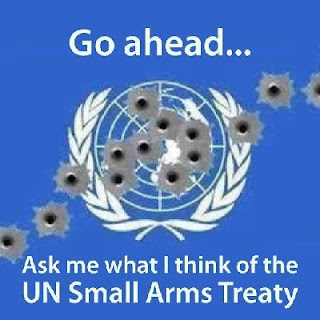 Despite the mewling and squalling of the Left, the treaty (if ratified) would have effects here.


1. Enact tougher licensing requirements, creating additional bureaucratic red tape for legal firearms ownership.
2. Confiscate and destroy all “unauthorized” civilian firearms (exempting those owned by our government of course).
3. Ban the trade, sale and private ownership of all semi-automatic weapons (any that have magazines even though they still operate in the same one trigger pull – one single “bang” manner as revolvers, a simple fact the ant-gun media never seem to grasp).
4. Create an international gun registry, clearly setting the stage for full-scale gun confiscation.

And there is that Second Amendment thing.

What you know about the Second Amendment, I wipe my ass with.

There's nothing in there about individual ownership. When will you right wing numbskulls understand this?

Moonbattery is full of shittery.

To whit: The sourced Forbes article says, "What, exactly, does the intended agreement entail?" Then goes on to explain "exactly", "While the terms have yet to be made public...". So the authors knows "exactly" how?

"It will almost certainly..." Based on what?

The FACT is that the UN Arms Trade treaty has absolutely no effect on the US Second Amendment rights, gun ownership or possession or any gun-related commerce within the borders of member states.

This article is just more scary bullshit pulled out of the ass of some right wing nut bag hoping that ignorant people will post it on their blogs.

"...hoping that ignorant people will post it on their blogs..."

Well, good. Then there's no reason for the US to adopt the treaty, either!

Only Obozo and the Far Left want it.

You must be wiping the blood dripping from your ass after you pulled the gerbils out of it.

What you know about The Constitution and the law would fit on the tip of a gerbil hair.

The imputed inference of the spirit of the law applies EXACTY to individual gun ownership, you stupid assinine son of a bitch.

In District Of Columbia v. Heller, 554 U.S. 570 (2008), The Supreme Court ruled that The Second Amendment "codified a pre-existing right" and that it "protects an INDIVIDUAL RIGHT to POSSESS a firearm (such INDIVIDUAL RIGHT) unconnected with service in a militia, and to use that arm for traditionally lawful purposes, such as self-defense within the home"...

Go back to washing dishes at your full time day job and stop trying to play, "JOKE For The Defense".

The rest of you AnnBuffoonAbortedFetuses really need to finish your GEDs. Remember, you get to keep that shiny free #2 pencil...its shiny glare matches that coming off your fat heads as you shove it deep up your nose to tickle that vacuum where your brains should be.

St. Revolution, you can learn something here...

Justice Scalia delivered the majority opinion. In ruling on the argument that only members of “a well regulated militia” have a right to firearms, Justice Scalia explained the legal structure of the second amendment when he wrote the following: “The Second Amendment is naturally divided into two parts: its prefatory clause and its operative clause. The former does not limit the latter grammatically, but rather announces a purpose.

Leonard W. Levy, who was a Mellon Professor Emeritus at Claremont Graduate School and Pulitzer Prize winning author on constitutional history, confirmed that the second amendment is the only amendment with a preamble, or prefatory clause, that are separate and one is not related to the other. In his book The Origins of the Bill of Rights, Levy writes on the second amendment structure:


You did nothing more than already prove my point, going the long way around the barn to do it.

I don't give a damn who delivered the majority opinion. All that matters is that the Supreme Court ruled in aggregate judgement.

Thanks for expounding in 20 words what I synopsized in two.

I don't need to learn anything here. Like usual, I'm right. There's absolutely nothing YOU can teach me.

Shut your fat, racist trap up.

And I know a hell of a lot more about the Constitution than you two knuckledraggers.


"There's absolutely nothing YOU can teach me."

You're right, to be a decent human being, I cannot possibly teach you that concept.

As Foghorn Leghorn (a kind of chicken) said "Don't bother me with facts, son. I've already made up my mind"