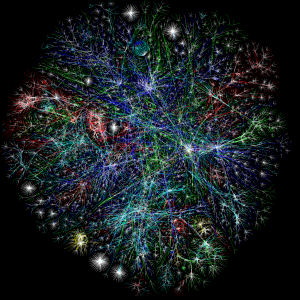 That's the Internet (color code is at the link.) The picture is important because it shows you that Bammy will not achieve "internet security" with the (D) PowerGrab bill.

But he WILL gain a lot of control.

These powers extend beyond declared emergencies, however. Rockefeller’s bill would immediately grant the ability of the government to control hiring and firing of jobs related to these so-called critical networks, because the President could unilaterally declare that jobs related to those networks would be required to be filled by people certified to the task by the government.

Consider the premise of the bill: we have to defend ourselves against a hypothetical attack by a foreign power on this country’s computers over the Internet. It sounds just so reasonable that we should just be able to “shut off the pipe” to country X until the threat passes, doesn’t it? The problem is, there is no one pipe. The Internet is not like the system of roads, centralized and government owned. The Internet is a tangled web of private networks, any or all of the biggest of which (”the Backbone”) might have their own connections to private networks in other countries (That's what the picture is all about.)

So. Bammy gets "emergency" power to appoint his own boyzzzz to run parts of the 'net, and sprays foofoodust about "national security" in the room.

But you don't get "national security." You get BammyBoyzzzz running the 'net.