The Error of GWB's Goal--Repeatable by the Next President? 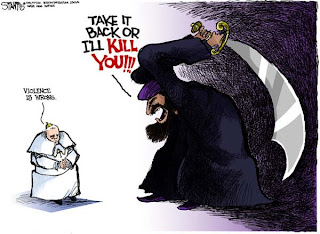 There will be endless discussions of the reasons "why" the war against Terror.

But "instilling [secularist] Western values" should not be one of them--as Weigel notes in passing as part of this interview.

Lopez: Who, among Muslims, should be held up as to encourage those who want to fight jihadism?

Weigel: The kind of Muslims who will be our most effective allies in the war against jihadism are those Muslims who want to make an Islamic case for tolerance, civility, and pluralism. The temptation to think that the answer to the problem of jihadism is the conversion of 1.2 billion Muslims to Western liberal secularism ought to be stoutly resisted as the ivy-league fantasy it is. The question is whether, and how, Islam can effect what Christian theology would call a “development of doctrine” on issues like religious freedom and the separation of religious and political authority in a just state. A lot of 21st-century history is riding on the answer to that question.

K-Lo then asks a really good question, even though she clumsily attempted to politicize a question which is far, far above politics. Weigel was kind enough not to call her utterly stupid:

Lopez: Do we deserve to win if we wind up electing Hillary Clinton or Barack Obama president?

Weigel: Whether we deserve to win or not, we’re much less likely to win with a president who manifestly does not understand the nature of the enemy or the multifront struggle in which we are necessarily engaged. A return to the Nineties — to foreign-policy-as-therapy — is not going to see us, or the Magdi Allams of this world, through to a future safe for the exercise of religious freedom.

But of course, Ms. K-Lo, (you twit!!!)--does John McCain understand the nature of the enemy or the multifront struggle?