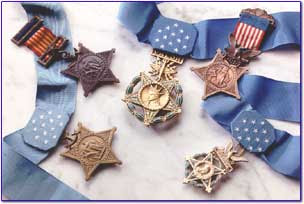 Ross McGinnis will receive the Medal of Honor, posthumously.

McGinnis distinguished himself so greatly in his first three months in Iraq that a waiver was requested - and granted - to promote him to Specialist (E-4) despite lacking the requisite time in service.
On December 4, 2006, at the age of 19, Ross McGinnis traded his life for the lives of four members of his squad, when he jumped on a grenade and shielded them from the blast. He remains 19 years old forever.
On the last day of his life, PFC McGinnis was manning the .50-caliber machine gun mounted in a turret atop his Humvee, and serving as the rear guard in a mounted combat patrol against insurgents and sectarian fighters. As the convoy made a turn onto a narrow street, a fragmentation grenade was thrown from the rooftop of an adjacent building. According to the official report, "[McGinnis] immediately yelled "Grenade!" on the vehicle's intercom system to alert the four other members of his crew...[he] made an attempt to personally deflect the grenade, but was unable to prevent it from falling through the gunner's hatch."

For his subsequent actions, McGinnis was posthumously awarded the Silver Star, the military's third-highest award for combat heroism (specifically, for "gallantry in action against an enemy of the United States").
According to platoon sergeant Cedric Thomas, who was commanding the vehicle, "McGinnis yelled 'Grenade...It’s in the truck!’...I looked out of the corner of my eye as I was crouching down and I saw him pin it down.

From the Silver Star citation:

When the grenade detonated, PFC McGinnis absorbed all lethal fragments and the concussion with his own body killing him instantly. His early warning allowed all four members of his crew to position their bodies in a protective posture to prepare for the grenade's blast. As a result of his quick reflexes and heroic measures, no other members of the vehicle crew were seriously wounded in the attack. His gallant action and total disregard for his personal well-being directly saved four men from certain serious injury or death.
"He had time to jump out of the truck. He chose not to."
Greater love than this has no man...
Posted by Dad29 at 8:30 AM