What You Don't Know Won't Hurt HIM 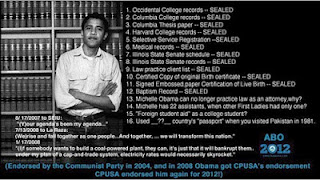 Check on the same thing...college records, birth certif., etc. for George W. Bush, George H.W.Bush, and tell me what you find.

You birthers are a real hoot.

And GWB's college record is well-known. He managed to graduate.

Finally: it was Obama himself who wrote that he was 'born in Kenya' for his autobio-brief submitted to his publisher.

I don't recall that you inquired about GWB's birth certificate, Tim. Then again, GWB's auto-bio never said he was born in Moscow, right?

He managed to graduate.

Obama never wrote that he was born in Kenya. The literary agent has stated that this was not written by Obama.

"This was nothing more than a fact checking error by me--an agency assistant at the time," Goderich wrote in an emailed statement to Yahoo News. "There was never any information given to us by Obama in any of his correspondence or other communications suggesting in any way that he was born in Kenya and not Hawaii. I hope you can communicate to your readers that this was a simple mistake and nothing more."

Where are W's military records?

Dan Rather has W's military records.

Obama has not because the press has not insisted.

Taken straight from P-Mac...I'm not really saying it, BUT IF I was saying it, I would say it that way. Let others do the dirty work for you.