Nobody's Watching Except the Feds, the States, and the Munis. 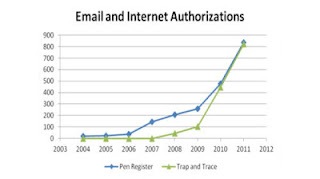 ...During the past two years, there has also been an increase in the number of pen register and trap and trace orders targeting email and network communications data. While this type of Internet surveillance tool remains relatively rare, its use is increasing exponentially. The number of authorizations the Justice Department received to use these devices on individuals’ email and network data increased 361% between 2009 and 2011.

Note well, (D) trolls, that this is the Obama Administration.  "Mr. ConLaw" himself...

And yes, it's worse than that.

...Because the existing reporting requirements apply only to surveillance performed by the Department of Justice, we have no idea of how or to what extent these surveillance powers are being used by other law enforcement agencies, such as the Secret Service, Immigration and Customs Enforcement, or state and local police. As a result, the reports likely reveal only a small portion of the use of this surveillance power.

And you thought that the "Statist" remarks were just exaggerated paranoia?