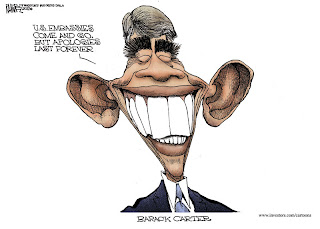 Not voting Obama.
Not voting Oromney.
Let the chips fall where the may.

In the words of Mundabor

Probably the results of the votes concerning Congress and Senate will have a bigger influence on the next four years than the choice between Obama and his (at least in social matters) pale imitation. A solidly conservative House and Senate would tame a bad President whoever he may be, and if this does not happen I begin to struggle to see – at least in social matters – what great difference Romney would make.

I think it can be legitimately wished that the Republicans would lose as many Presidential elections as it is necessary to either die or understand that in order to win they have to candidate a seriously conservative candidate. Whilst it is difficult to deny piss is probably less bad than shit, I can’t blame those who do not want to help piss to win...............................

Actually it's more like 1983 and the Beirut bombing that left 250 Marines dead, after which St. Ronnie cut-n-run. Obama's got more backbone, and will stay the course.

"Stay the course"? You mean keep the Marines undermanned and without bullets? You have one hell of a sense of what constitutes "backbone".