"Crush your enemies. See them driven before you. Hear the lamentations of their women."

Well, the wimminfolk write for Bloomberg and the NYT, and there's a bunch of lamenting going on.  Seems like certain people are actually, like, BANNED from entering the US.   Even if they work for Google, or them other intertubian wondercompanies.

Elsewhere, a couple of Iraqis were detained and--TA DA!!--they called lawyers.  (Go back to 'crush your enemies' when you hear 'lawyer.')

a group of protesters rent-a-Commies showed up with hastily assembled signs and began chanting about no bans, no walls… basically “no Trump” from the looks of it.

They put the signs on George Soros' credit card.

Iran has banned all travel INTO the country by US citizens.  We are reminded of this: 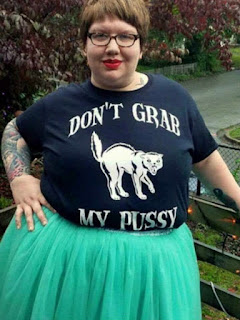 OK, and I won't travel to Iran, either.

Every species of government has its specific principles. Ours perhaps are more peculiar than those of any other in the universe. It is a composition of the freest principles of the English constitution, with others derived from natural right and natural reason. To these nothing can be more opposed than the maxims of absolute monarchies. Yet, from such, we are to expect the greatest number of emigrants. They will bring with them the principles of the governments they leave, imbibed in their early youth; or, if able to throw them off, it will be in exchange for an unbounded licentiousness, passing, as is usual, from one extreme to another. It would be a miracle were they to stop precisely at the point of temperate liberty. These principles, with their language, they will transmit to their children. In proportion to their numbers, they will share with us the legislation. They will infuse into it their spirit, warp and bias its direction, and render it a heterogeneous, incoherent, distracted mass. I may appeal to experience, during the present contest, for a verification of these conjectures. But, if they be not certain in event, are they not possible, are they not probable? Is it not safer to wait with patience 27 years and three months longer, for the attainment of any degree of population desired, or expected? May not our government be more homogeneous, more peaceable, more durable?


Yep. I'm hearing the lamentations of their women allright.