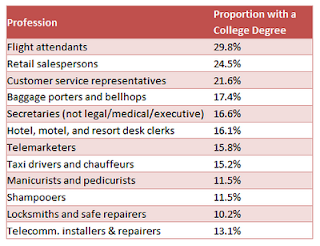 We've mentioned this a few times. Now someone went and proved it.

The data suggest a horrible decline in the productivity of American education in that the “inputs” used to achieve any given human capital (occupational) outcome have expanded enormously. More simply, it takes 18 years of schooling (including kindergarten and the typical fifth year of college to get a bachelor’s degree) for persons to get an education to do jobs that a generation or two ago people did with 12-13 years of education (graduating more often from college in four years and sometimes skipping kindergarten). . . . All of this supports the notion that credential inflation arises from a perceived need by individuals to demonstrate potential employment competence through a piece of paper, i.e. a college diploma. Employers are using education as a screening and signaling device, at a low cost directly to them (although not costless because of the taxes they pay to sustain much of this), but at a high cost to the perspective employees and to society as a whole.

Other effects include 'resume inflation,' wherein someone claims a degree which they did not obtain.

The Bell Curve hasn't changed. A bunch of people are perfectly capable of doing all sorts of jobs without a degree in History, English, Women's Studies, or Phy Ed.

But it will cost them a LOT more to get that job.