In the last 15 years, there have been three "watershed" events, recorded in pictures and videos, which have crept into the American consciousness and have changed forever the perceived relationship between The Government and The Governed.

First was the Clinton/Reno incineration-obliteration of the Branch Davidians at Waco in 1993: 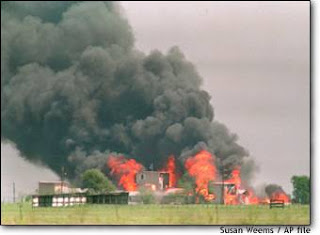 Next was the Clinton/Reno INS-SWAT team siezure of Elian Gonzales in Miami: 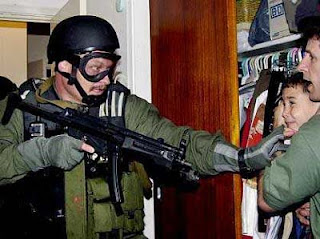 And finally (link below), the brutalizing of a New Orleans woman whose 6-gun was siezed by the New Orleans Police Department after she told them she had the gun for self-protection following Katrina:

http://www.youtube.com/watch?v=-taU9d26wT4&mode=related&search=
All these events (plus the FBI's "mistaken" execution of a woman holding a baby at Ruby Ridge) have had an impact--reflected in a bill now before the Wisconsin State Senate.
The bill cakewalked through the Assembly, 84-13.
State lawmakers want to clip the power of the governor and local officials to seize people's guns during emergencies, saying that authority could trample the rights of citizens.
The governor, the adjutant general who runs the Wisconsin National Guard and local officials have long been able to exercise emergency powers during disasters or civil unrest. The bill would prohibit those officials from using their emergency powers to "restrict the lawful possession, transfer, sale, transport, storage, display or use of firearms or ammunition."
Reps Colon, Kessler, Richards, Sinicki, Travis, and Young were among those voting "No."
Although this should be a no-brainer for Doyle (even Russ Decker wants it passed through the Senate quickly,) Doyle's spokescritter issued the usual double-talk:
"We really need to understand the implications of curtailing the powers of emergency management during a time of crisis," Vigue said.
Uh-huh.
That's not what the bill says, of course:
Gunderson said his bill would not curb the normal powers of the police because they would be able to do the same things during emergencies that they can do during other times. Officers could set up roadblocks to stop traffic if needed, which would prevent everyone - including those transporting firearms - from getting into specific areas, he said.
You can believe what your eyes tell you (above.) Or you can believe Freddy Kessler & Co.
Just remember the Party affiliation common to New Orleans' Mayor, Bill Clinton, and Fred Kessler.
More important, remember the REAL purpose of the Second Amendment.
It ain't about hunting, folks.
Posted by Dad29 at 6:59 AM

Shouldn't you also point out the lies of Gunderson's party, the innacuracies of the NRA, and wonder if that is worth believing.

I'd rather trust a cop, than an armed vigilante shooting at rescue copters or a group of paranoid thugs not letting people cross a bridge to safety.

Nahhhh...Go ahead. YOU point out the "lies" and "inaccuracies", Capper. I'll wait.

Actually, I trust the cops. It's their commanders I don't trust--you know, Mayors, Governors, Presidents.