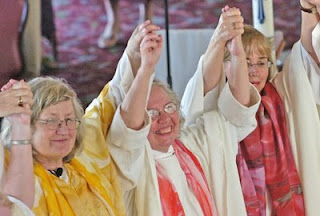 (Picture of OTHER Poncho Ladies courtesy of Christus Vincit Blog.)

The 'tell' in this article is in the last graf. (Scroll down a bit.)

Alice M. Iaquinta of West Bend is one of two women who will seek the Catholic priesthood through unsanctioned ordinations Sunday afternoon in Minneapolis, Minn., according to Roman Catholic Womenpriests, a group that has organized similar ordinations in Europe, Canada and Pittsburgh. Three women will seek ordination as deacons at the same service.
All of the ordinations will be performed by Patricia Fresen of Germany, one of the women the group says were secretly ordained as bishops by anonymous male bishops in apostolic succession and good standing with the Roman Catholic Church. Milwaukee Archbishop Timothy M. Dolan has termed such ordinations "simulated and invalid."
Iaquinta issued a statement saying she discerned a call to the priesthood after serving as a pastoral associate and graduating with honors from St. Francis Seminary in St. Francis with a master of divinity degree in May 2006.

Poncho Ladies can be identified because they wear ponchos (pretending that they are chasubles, which are worn by priests.)

There is also a typo in the article. Ms. Iaquinta did not "discern a call." In reality, she suffers from "delusions of a call."

Clearly, her M. Div. coursework did not prepare her for service to the Roman Catholic Church, which brings up the question 'exactly what course-requirements exist?' in the M.Div. program at St. Francis Major Seminary...
As a child, she was a member of Trinity Lutheran Evangelical Church in Kenosha, where she was baptized and confirmed. She converted to Catholicism in 1964.
...Iaquinta is single and has three children and four grandchildren. She holds a masters degree in education, and will return this fall to the Wisconsin Technical College system, where she has taught for 35 years. Graduating with honors from St. Francis Seminary in St. Francis, Wis., with a master of divinity degree in 2006, Iaquinta is pursuing her doctorate of divinity degree. She was ordained a deacon through Roman Catholic Womenpriests on May 27 in Toronto.
It is fair to state that Ms. Iaquinta is another example of one who is 'educated beyond her intelligence', an honorific bestowed on Abp. Rembert Weakland by Mike Schwartz of the Catholic League.
Christus Vincit offers a hymn for this poor woman:
Faith of the grannies, priest-wannabes,
Faux ordinations on the high seas,
In the procession, three gifts are seen:
Bread and wine, and, thank God!... Dramamine.
Their day's long gone, they grasp at straws
Strive to make sense of menopause.
Faith of the Dinosaurs, double-knit clad,
Dreaming of whate'er "edge" they once had,
And of their glory days, now long gone.
Would they let go, the Church could move on.
Lumb'ring and desp'rate, it is plain
Soon naught but fossils will remain.
Posted by Dad29 at 12:04 PM

Poncho Ladies™ were actually dubbed such, yes, because of their "vestments", but mainly their resemblences to those ponchos you can buy only at dollar stores. BWA HA HA HA HA!
BMP

Did I mention you can get those in all the liturgical colors and more? LMAO!

Perhaps, to paraphrase, "She subtracts from the sum-total of human holiness with every one of her words or actions".

Why do these "ladies" become fake priests? I mean Monsignor has a better pay grade!! Why not Bishop or Cardinal. I mean if you're going to play priest go for the gusto.

Patricia Fresen is the "ordaining bishop". Haven't seen a Cardinalette yet. As for a lady Monsignor, wouldn't that be "monsignora"? hehehehe

This reminds me of 'playing shop' as a kid in Ireland years ago. We would set up shop and 'sell' things to other kids - being careful to observe the rubrics of store ownership: itemized invoices, payment in appropriate 'scrip' etc.

It was all great fun at the time but, unlike the fake "feminist priests', even as kids we knew it was make-believe and just a game.

I don't understand why you call them poncho ladies. Male priests get in front of their congregations on a regular basis in dresses, but you make fun of women wearing dresses by trying to call them ponchos. They look like dresses to me.

I can understand the concern about unsanctioned ordinations but the time is nonetheless here for real dialogue on expanding the diaconite and priesthood.

I'm highly doubt this will lead to ordination of women as priests, an extreme longshot because there are theological arguments against it, but the church just can't dismiss the role of women in contemporary society and more specifically in the church.

Arguably there is theological support for ordination of women as deacons and this is something that should be pursued with an open mind and open heart.

Show your hand. What 'theological arguments' exist which both sanction ordaining women as deacons AND not ordaining them priests?

Faithful Catholic - you see, the male priests are real priests using real vestments. The "womynpriests" are pretending they're priests, so they need not spend top dollar on tree-hugger-friendly tie-dye low budget poncho vestments that your everyday dollar store or job lot may sell.
Hopefully this helps.

While your testimony may well be true, prudence dictates that I delete the comment.

Thanks for your input!